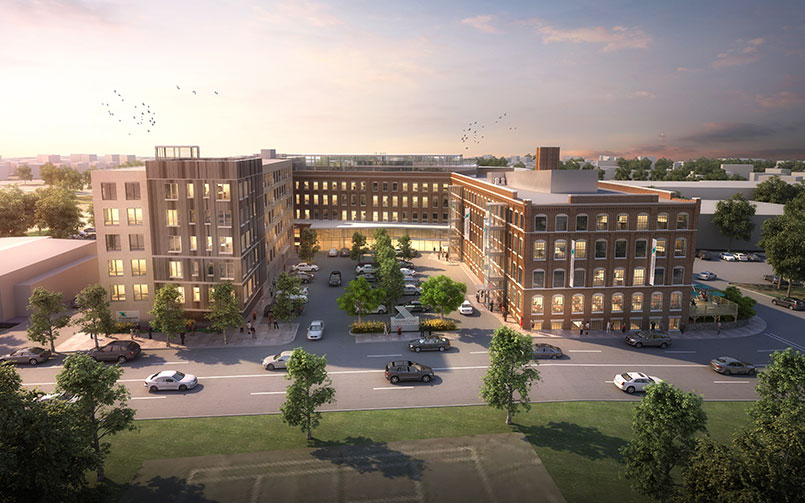 By Grant Welker, gwelker@lowellsun.com
Read the article on the Lowell Sun: http://www.lowellsun.com/news/ci_29669659/iconic-vision-unveiled-thorndike-mill-lowell

LOWELL — A long-dilapidated mill at a major gateway to the city would become an iconic building with dozens of new apartments and several restaurants, developer Sal Lupoli told the Planning Board Monday in the first look the public got at the project.

Ever the energetic salesman, the Chelmsford resident pitched his development at the former Comfort Bedding and Furniture mill as one that would restore an aging brick building and add modern glass additions, including a new building in a later phase.

“This is an outlier of a location you have in your city, unlike anything else,” Lupoli said of the property, which would be redeveloped as Thorndike Mill. He vowed it would become “an iconic symbol. The project has yet to be formally submitted for approval, with Monday’s meeting the first pre-application hearing for the Planning Board to give feedback. Lupoli and his planning staff shared a series of renderings showing what the finished product would look like but have yet to conduct a traffic study or provide some other details.

Planning Board members said they were impressed by the look of the project, but mentioned the need to carefully consider effects on traffic. The modern building that Lupoli proposed for a second phase — which would make the current L-shaped building more of a U — was given some mixed reviews.

“I really like your vision,” member Joseph Boyle said.

But, he added, the modern building should better complement the adjacent Keith Academy apartment building, which he called “one of the real architectural gems of the city.”
Jaclyn Smith, a member of the Keith Academy board of trustees, said she had some concerns with the new building, especially because of the proximity to the existing apartments.

The project would rely on 150 dedicated parking spaces for residents in the adjacent Lowell Regional Transit Authority parking garage.

A raised walkway over the Gallagher Terminal entrance would connect the parking garage to the mill.

The first phase would include 42 housing units, including seven to be built in a glass addition on the roof of the current structure. There will be at least two restaurants, including potentially a Salvatore’s, an Italian chain founded by Lupoli.

Lupoli, owner of the Salvatore’s restaurant and Sal”s Pizza chains, bought the site just over two years ago. Lupoli has also developed the Riverwalk Properties site in Lawrence, which includes about 200 tenants and more than 3.6 million square feet of space.

The Thorndike Mill plan is still in its early stages. Planners did not give a total project cost or a timeline to begin. The building, historically known as the Hood’s Sarsaparilla Laboratory, was built in 1882, according to documents on file with the city’s Historic Board. Two additions were made in the following years including a major one — the part that goes out toward Thorndike Street — in 1893.

With 150,000 square feet, it was said to be the largest building in the world devoted to manufacturing medicine.

The man for whom the company was named, Charles Hood, was a Vermont native who created a new painkiller, sarsaparilla. The company, which also made other drugs, preceded the Thorndike Street building, with Hood choosing its location because of its proximity to the rail line behind it.

While the Historic Board will have to sign off on any exterior changes, the building isn’t known for the architectural flourishes of many others in Lowell’s downtown historic district. Even the building’s historical file fails to note its style as it does with many others, simply calling it “utilitarian.”

What may have been the property’s most distinctive feature — its 170-foot four-sided smokestack — was badly damaged by lightning in 2014 and, becoming a safety hazard, was taken down.